Miguel Cervantes is arguably the most famous Spanish writers. Thanks to him, such characters as Don Quijote and Sancho Panza appeared. They long outlived their creator and turned into the symbols of Spain. However, Cervantes’s talent turned out of such magnitude that Don Quijote became a unique cultural phenomenon, which is still growing and expanding.

Cervantes’s biography is closely linked to Alcalá de Henares. This is a small town near to Madrid. Here the writer was born and brought up, and the town doesn’t cease to praise its legendary habitant. Madrid though became his last resting place and one of the main centres of his heritage. So here is a route around Cervantes’s places in Madrid, which will let you feel a true Don Quijote. 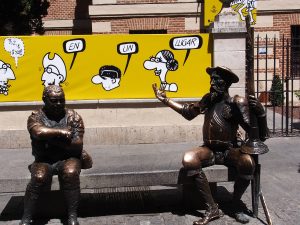 If you get hungry after such an intense walk, then here’s a personal recommendation, the restaurant El Ingenio de Cervantes. It is situated by the Square of Spain, and although Cervantes did not dine here, this restaurant is worth your attention. Its owners gathered a beautiful collection of art inspired by Cervantes’s genius as well as editions of Don Quijote in all languages. Besides, you can enjoy a proper Castillean meal here. 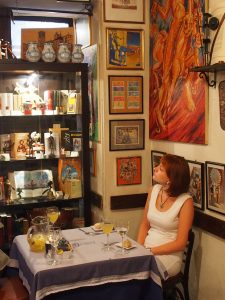